Introduction
It is well known that the clinical manifestations of granulomatosis with polyangiitis (GPA)(Wegener’s granulomatosis) depend on whether the condition is generalised (affecting the lungs and kidneys) or limited to the lungs [1]. Nervous system involvement has been described with variable frequency in both clinical forms, reaching 54% in some series [2,3] but is uncommon as first manifestation of the disease. The present clinical case constitutes an exception in this sense. A systematic review of the cases of meningitis produced by GPA, published in 2006, indicated an excellent response to initial immunosuppressive therapy with cyclophosphamide and glucocorticoids. Since then, many authors have described cases of meningitis refractory to such treatment, but responsive to rituximab [4,5] or infliximab [6].

Case history
A 53-year-old male presented with a two-weeks history of neck stiffness and dorsal spinal pain causing limited mobility. He reported rhinorrhoea, nasal congestion, fever (up to 38ºC) and constitutional syndrome associated with a weight loss of about 20 kg in a few months. The physical examination showed no relevant disorders, except for neck stiffness with movements. The X-ray study revealed a condensation in the upper left lung lobe (ULL), and another lesion in the pleural base of that same lobe. In addition to these lesions, the chest CT scan identified small contralateral nodules and mediastinal adenopathies measuring 10 mm in size. In view of the severe cervicothoracic pain that failed to respond to the usual analgesics, an MRI study was requested, which evidenced signal intensity alterations in the spinal cord, as well as signal alterations of the cerebrospinal fluid and vertebral bodies, suggesting leptomeningeal infiltrating disease with associated bone involvement of probable neoplastic or inflammatory nature. In addition to revealing metabolically active foci in the lungs and in the spinal cord from C3 to D5, the PET-CT scan identified activity in the paranasal sinuses, of inflammatory appearance. In view of the above, and given the lack of improvement with antibiotics and the suspected granulomatosis and polyangiitis, we requested antineutrophil cytoplasmic antibody (ANCA) testing, which proved positive at low titres – indirect immunofluorescence being unable to specify a peripheral or cytoplasmic pattern. A confirmatory lung biopsy was obtained, involving two different samples. Tissue sample (lung parenchyma) revealed areas showing a nodular pattern with necrotic areas and abscessification, in some cases related to blood vessels. Together with these areas we observed necrotizing angiitis, as well as vasculitis affecting the capillaries of the alveolar septae (capillaritis). All these findings were consistent with GPA.

At this point, treatment was started with methylprednisolone 1 g for three days, followed by prednisolone 1 mg/kg b.w. and cyclophosphamide boluses (15 mg/kg b.w.). Tolerance was good, and clear clinical improvement was observed.

Two months after the diagnosis the patient was again admitted due to decreased visual acuity with blurred vision in the left eye, headache and gait disturbance. He reported no pleuritic or chest pain, or dyspnoeic sensation, and the chest X-rays showed resolution of all the pre-existing lung nodules. Following consultation with the Neurology Department, retrobulbar optic neuritis was diagnosed, with gait disturbance and a positive Romberg sign, as well as deep sensory disorders in the lower extremities. Brain and cervical spinal MRI showed significant dural enhancement, with questionable spread to the optic nerve sheathes. The dorsal-lumbar-sacral MRI scan showed persistence of the dural enhancement already seen in the previous study.

Following the poor response to standard treatment, it was decided to start rituximab in bolus doses together with methylprednisolone, and to continue maintenance therapy with mycophenolate. With these treatment measures the patient recovered and has been followed-up on since then.

Discussion
The neurological manifestations of GPA can occur at any time during the course of the disease, though they are more common in advanced stages. Peripheral neuropathy is the most common disorder, though there have also been reports of symmetrical distal motor-sensory neuropathy, cranial nerve involvement, external ophthalmoplegia, and cerebral infarction [7]. Meningeal disorders are uncommon however [8]. Three mechanisms have been described in the pathogenesis of central nervous system: spread of the granulomatous tissue from the nasal, paranasal or orbital cavity; the development of granulomas in the brain, meninges, cranial nerves or in parietal bone; and granulomatous vasculitis of the central nervous system. In up to 30% of all cases a combination of these mechanisms is involved [9]. In this context, meningitis is a rare complication – only 48 cases having been described in the literature to date. To our knowledge, this is one of the few existing reports of meningitis refractory to standard therapy in which rituximab was required [5]. 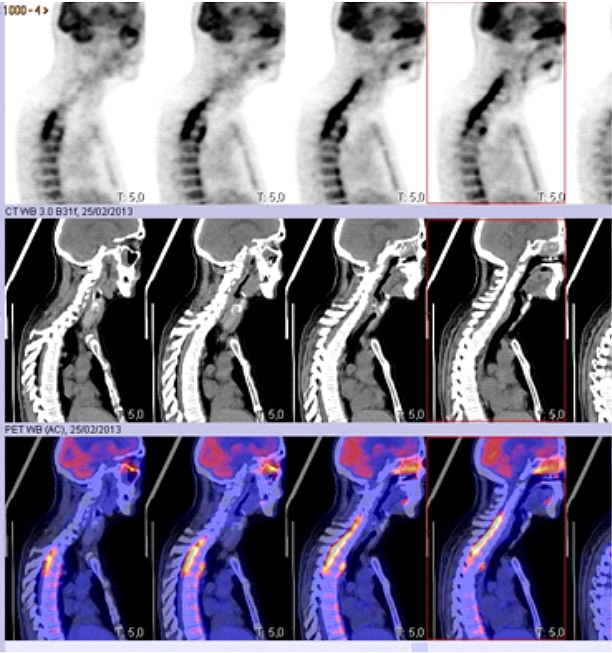 Feedback & comments
If you would like to share any comments on this case please send them to wasog@gosker.nl and after peer review your comment(s) will be posted below.