Sarcoidosis is a multi-organ inflammatory disorder of unknown origin and the development of granulomas is the fundamental abnormality. The clinical manifestations of sarcoidosis are highly variable and many organs can be involved [1]. Besides pulmonary symptoms many patients suffer from fatigue, pain and autonomic dysfunction. Recently, we found that small fiber neuropathy (SFN) appeared to be rather common in sarcoidosis patients [2]. Moreover, about 50% of patients with small fiber neuropathy showed impaired cardiac sympathetic nerve activity what can be assessed by iodine-123 metaiodobenzylguanidine (I-123 MIBG) [3].

To describe a sarcoidosis patient with impaired cardiac sympathetic nerve function which improves after carvedilol therapy.

A 48 years-old man known with pulmonary sarcoidosis (disease duration 5 years) and small fiber neuropathy presented with cardiac arrhythmia and dizziness since two weeks before admission. Inflammatory parameters of sarcoidosis were slightly increased compared to three months earlier. Because of the cardiac symptoms the cardiac sympathetic nerve function was assessed by myocardial SPECT imaging with the use of radiolabeled I-123 MIBG. The images demonstrated absent uptake of I-123 MIBG in the apical inferior wall of the myocardium (Figure 1a). Bulls’ eye quantification showed a defect size of 16.3% (Figure 1b). A myocardial perfusion SPECT scintigraphy with Thallium-201 showed normal perfusion in the apical inferior wall. Echocardiography and MRI of the heart were also judged normal. He was treated with carvedilol for five months and his clinical condition stabilized and no activity of sarcoidosis could be found. He did not recall heart rhythm disturbances anymore. The I-123 MIBG SPECT study was repeated and showed improvement of the uptake in the apical inferior wall (Figure 1c), with a defect size of only 3.9% (Figure 1d). 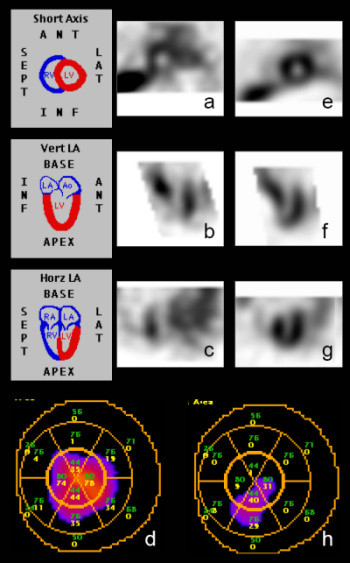 In patients with dilated cardiomyopathy it was demonstrated that the cardiac sympathetic nervous system function can improve in response to carvedilol therapy [3]. Besides a selective antagonist effect on alpha 1- adrenergic receptors, thereby decreasing the total peripheral resistance, and a cardiac nonselective beta – adrenergic receptor blocking action, thereby preventing reflex tachycardia, carvedilol has a potent antioxidant action [4,5]. Sarcoidosis has been suggested to trigger an oxidative stress response as indicated by an increased activation of NF-κB [6].

This case provides clinical support that oxidative stress may contribute to cardiac dysfunction in sarcoidosis through increased susceptibility to free radical injury and impairment of intracellular calcium transport. Moreover, it illustrates improvement of cardiac sympathetic function in a sarcoidosis patient after 5 months of treatment with carvedilol. Future studies should explore the clinical relevance of the relation of oxidative stress and cardiac dysfunction in sarcoidosis.