Sarcoidosis is a multisystem inflammatory disorder of unknown cause which is manifested by the presence of noncaseating granulomas in affected organ tissues. It commonly affects young and middle-aged adults and predominantly affects the lungs and intrathoracic lymph nodes. The most common features of the radiographic findings at the time of diagnosis are bilateral hilar lymphadenopathy and pulmonary infiltration being rare a pattern of parenchymal nodules.

She had never smoked and her medical history was unremarkable except for a left breast nodule 13 years before, which was biopsied and had no pathological relevance. She had worked in a cloth factory for 8 years and had been exposed to chickens. Physical examination on admission revealed a left breast nodule (upper external quadrant). Her body temperature was 36.8°C. The white blood cell count was 12,7 109•L–1, serum C-reactive protein was 4,6 mg/dl and she had mild hypoxemia (pO2 75 mmHg, breathing room air). Routine chemistry, urinalysis and electrocardiogram were normal as well as gammaglobulins and angiotensin converting enzyme at 43 IU/L. Tumour markers were assessed; CEA, aFP, CA 19.9, SCC, CYFRA 21.1, NSE and CA 72.4 were normal. CA 125 was high at 179 U/ml (>27). Abdominal and pelvic ultrasound showed no abnormalities. Mammography and breast ultrasound showed in the upper external quadrant mild asymmetry due to densification of the left breast, apparently non-pathological and benign micro calcification on the upper external quadrant of the right breast.

Bronchoscopy showed no endobronchial abnormalities. The total cell count in the bronchoalveolar lavage fluid was 60/mm3 with 86% alveolar macrophages, 12% lymphocytes and 1.0% eosinophils. CD4/CD8 ratio was 2.8. Microbiological exam of bronchial aspirate revealed no bacteria, mycobacteria or fungi. Neither transbronchial nor transthoracic lung biopsy were diagnostic. A surgical pulmonary biopsy was performed and revealed aggregated non-necrotizing granulomas with occasional multinucleated giant cells (figure 3). These histopathological features were compatible with sarcoidosis. Galium scan showed mild uptake in the hilar and ocular regions. These findings were of uncertain clinical value. 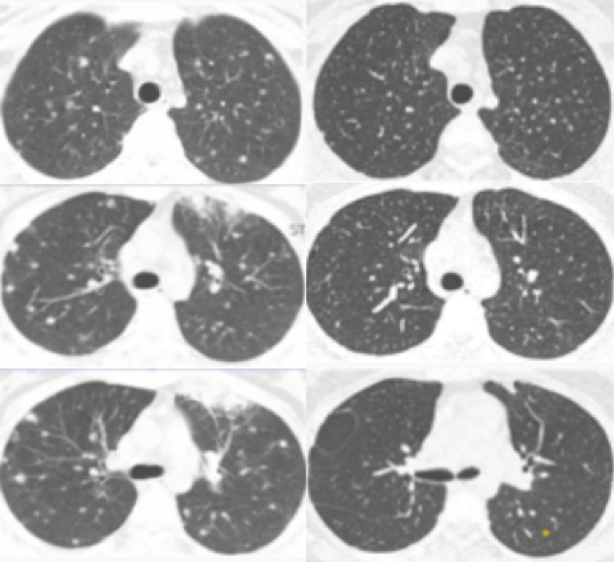 As at the time of diagnosis the patient was asymptomatic and lung function tests were normal it was chosen to “wait and see”.
At follow-up, spirometry and diffusing capacity remained normal as well as blood chemistry and angiotensin converting enzyme. A chest roentgenogram performed one year later showed a reduction of the interstitial features (figure 1B). High resolution CT revealed residual fibrotic changes at the sites where previously the bigger nodules had been (figure 2 right).

In sarcoidosis, the lungs are affected in over 90% of patients and 70 to 75% of these cases present with bilateral hilar lymphadenopathy with or without parenchymal infiltrates, which in combination with clinical features can be highly suggestive of the diagnosis. However, in patients with multiple parenchymal nodules the hypothesis of sarcoidosis is not clear and differential diagnosis should include metastatic lung cancer, Wegener’s granuloma and pulmonary micosis.

When needed, treatment consists primarily in systemic corticosteroids. However, except for life- and sight-threatening organ involvement, it should be carefully considered whether the patient might benefit from treatment. For asymptomatic pulmonary sarcoidosis, a watch and wait approach is appropriate; treatment should mainly be considered if symptoms develop or lung function deteriorates.

This case report highlights a rare presentation of Sarcoidosis (stage III) with a spontaneous remission which is seen in only 10 to 30% of cases of the disease at this stage.